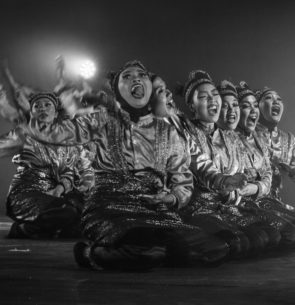 The name Radha Sarisha comes from the Sansckrit word for “proud succes”.

The group was founded in 2008 and consists of about hundred students from the faculty FISIP, the Faculty of political and social science. Here they study the art of the dance from Indonesia. They study traditional dances as well as modern dances.

The diversity of dance and music that this group will perform for you, stems from the diversity of the country. Indonesia consists of more than 17.000 Islands. The group is based on Java, one of the central islands of the archipelago. Because of these different islands, there is a large ethnic diversity and a clash between tradition and modernity.

Their most famous dance is the Saman dance, also known as the dance of a thousand hands.

Despite the short existence of the group, they’ve already won dozens of prices on the international stage.